sunshine on a stick 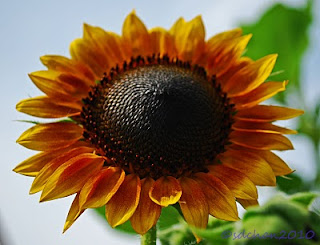 The heavy rain was welcome, to be sure. The heat of summer was beginning to feel a smidgen oppressive. If humidity and 100 degree plus temps can even be considered a trifle of hot oppression.

The wind and hail had me concerned, though, that the flowers the children had grown from seed might be pummeled and broken.

The sunflowers still stand intact, despite one whose head hangs a wee low. Tis a bit heavy that one, as it is of the large variety. 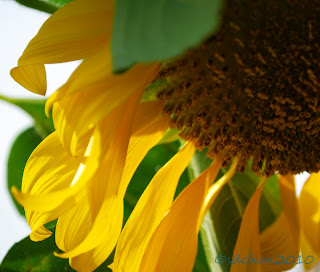 Sweet and cheerful these blooms are. Smiles without faces.
Sunshine on a stick.
Posted by StarCat70 at 1:46 AM No comments:

Email ThisBlogThis!Share to TwitterShare to FacebookShare to Pinterest
Labels: environmental, the cuteness

P90X--Yoga X and an unexpected rift

So this is week 10 of our P90X journey. Tonight is Yoga X, one of my favorite workouts.

Apparently, Yoga X is not a favorite of some P90X users. I suppose I can understand, it is a bit difficult and it is an hour and a half long. But what I had not expected was the other reason to dislike Yoga X.

Last night, whilst perusing YouTube P90X results videos, for inspiration o' course, I stumbled across a video review by a previous user of the workout DVDs. This user was displeased with the addition of yoga in the P90X program.

Now, I don't know about this person in particular, but when one purchases the DVD set, you sort of know right away there will be yoga involved. That's the draw, the diversity of the workouts, which happens to include yoga. And the program is not cheap, so you might want to know what you're paying for.

Anyway...
The P90X user was displeased and made a point to mention that Tony Horton should make a workout that did not include yoga.

I suppose I'm a touch naïve. I see nothing wrong with Yoga X. I'm getting fantastic flexibility and balance. After the workout, I feel great!

Never once did it cross my mind that my soul was in danger. Though, it seems, according to some, should I continue on this path performing Yoga X, my spirit will be sullied and I may become taken over, as it were. Egad.

I'm not worried. And I shan't be worrying others with this possibility. I suppose if one wants to sully their spirit, there are many other fine ways of doing it, whether one partakes in Yoga X or not.

And so, of course, I went off on tangents with this concept of the dangers of yoga and the groups who oppose its practice.

I looked up the reasons for Christian fear of yoga. I guess I should know the reasons for the fear, but me being a person of open mind, I forget how closed some thinking is.

What I found is a good reason some people fail to embrace organized religion. Doomed either way.

The hypocrisy, absurd. So much so, that some Christians are finding ways to perform yoga and call it something else, because "yoga" is "evil".

Let me see if I have this straight...
Yoga is found to have benefits. The moves promote health and a sense of well-being. But, those moves are created as a way to worship multiple gods. To Christians this is very bad, of course, as they do not worship multiple gods. Understood. Makes sense to me. I can respect that.

So, these yoga moves are being "adopted" (or plagiarized) by some Christian groups and then renamed to better follow their beliefs.

How is that okay?

I found another P90X user on YouTube who didn't like Yoga X because it was not spiritual enough! Go figure.

You can't please everyone, Tony Horton.

My search for the reasons to oppose yoga took me in many different directions. I even ended up on a site with a map of hate groups in our nation.

It's somewhat disturbing to find religious organizations with lovely, peaceful names on a national hate groups list. Disturbing and misleading. Be careful guys!

Ah well... I could go on about this topic, but it's almost Yoga X time!