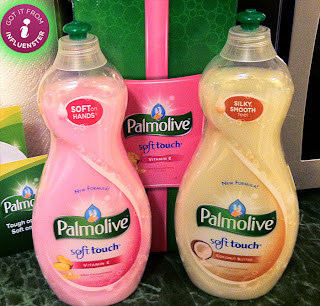 As promised, here is my review of the Palmolive soft touch dish soap I received complimentary from Influenster for testing purposes.

Of the two versions I was given, Vitamin E and Coconut Butter, I tried the Vitamin E.  I chose this one probably because it is pink, which made me think it would have the best fragrance.  Although, after further inspection, I found both versions to have a lovely delicate scent.  Which seems to be the case with all other Palmolive dish soaps I've tried, making Palmolive one of my favorite brands.  Yes, fragrance is kind of a big deal with me!  haha!

So how well does it work in cleaning dishes?

Quite well, actually!  I didn't need much of the Palmolive soft touch to get even greasy dishes and plasticware clean.  It rinsed off nicely, leaving no residue.  With the Ajax brand dish soap I used previously, I needed quite a bit more product to get similar results and had difficulty getting the dishes completely rinsed.

Is it really gentle on the hands?

Yes!  With other products I've used, I would need to slather on the hand lotion after washing dishes.  The products were simply too drying.  But, after using Palmolive soft touch, my hands felt remarkably soft.  The skin wasn't tight or itchy.  I didn't need the hand lotion afterwards.  It was so good, I put some in my bathroom soap dispenser.  It's a great hand soap, too!

Overall, I think Palmolive soft touch dish soap is a wonderful product.  What impressed me most about it is though the consistency is thick, creamy and soft, it cuts through grease and food particles on dishes and rinses completely clean after.  It surprised me, because I thought there was no way something that felt so gentle and slippery could have the strength to take the grease off of plastic without leaving a trace.  But it does!  And the scent, while not overpowering, is quite pleasant.  I'm spoiled!  haha!

Thanks Influenster for giving me the opportunity to try Palmolive soft touch Vitamin E.  What a fantastic product!

In this tutorial, I use a vivid purple with a bit of what looks like a denim blue.  To create a little more interest, I apply a small amount of a pretty purple glitter liner .  It looks much more sparkly in real life so one doesn't need much.

This video is supposed to be in HD, though it seems for now it appears in 480p.  Still, I think the quality will suffice.

Finally!  After much face-squinching and nothing but trouble with the old editing software, I've finished the A-Kon video.  Of course, the new Vegas Movie Studio 12 helped a great deal!  That, and my decision to scrap most of the video I had of the convention.

Yes, what you see here is at least 2 times shorter than the original video I had put together.  Most of the footage was simply too shaky.  Not fun to watch at all.  And no amount of stabilizing in the editor helped.  I hope what's left is enough to get some idea of the big event in Dallas.

I mentioned before, we weren't supposed to be in Dallas that Saturday.  As luck would have it, a friend of the family had a spare hotel room and offered it to us.  We went, sans convention badges, planning only to roam the halls of the Hilton Anatole, which is the new venue for A-Kon.  I think we were lost the whole time!  Still, it was an adventure.

Just a little tip, to myself, and everyone who likes to shoot video.  Tis much, much easier to record nice and smooth video with a tripod.  Or, if you're walking around, a fancy piece of stabilizing equipment might do.  It's much more difficult to stabilize that vid in editing software.  Particularly, if you've got loads of it!  I'll say a similar thing about photography.  Much better to take the time to get a decent shot than it is to try and "fix" a pic later.  Just sayin'.  With the understanding that there are of course, on occasion, happy accidents.

This is not one such occasion.

Let me start from the beginning...

I wasn't supposed to be attending A-Kon 24 this year.  There was no badge in my hands.  But, a good friend of ours had an extra hotel room to offer us, and thought we might enjoy being in the atmosphere of the anime convention.  Indeed!  This offer could not be refused.  The room was lovely, by the way.

With vid-cam in hand, we walked the grounds and filmed what we saw.  No fancy equipment.  Lots of video.  Very bad video.  Nauseating video in desperate need of stabilization.  Gah!

At this moment, I'm switching back and forth between this blog and video editing software, selecting clips to fix as I go.

Another note to self:
If the software fails to render video 4 times, attempting to render a fifth time, I dunno, probably won't work!
There were phantom memory issues with Vegas Movie Studio HD Platinum 10.0.  Others spoke of this problem, one that seems to be hit and miss.  Sometimes you get the error, sometimes you don't.  It seems there is no real resolution for it, other than to upgrade to a newer version Movie Studio.  Which I did (Shhh!...some of us don't know about this little expenditure).  I'm operating Movie Studio Platinum 12 now.  So far, so good!

If all goes well, I may soon have an A-Kon vid to post!  Though a shorter version of the original.  If only I'd had my DSLR camera with me, I might have some such item of quality to post.  Egad.  Another notable thing.

More on this later...