A few days ago, a nice little thunderstorm rolled past our town, just to the south.  In it, there was plenty of lightning to give us a good show.  Just the lights, no sound.  So in silence, I filmed the event with the GoPro Hero3 Black Edition.  I had to zoom in using the video editor, which may have affected the quality, but still.  I also had a difficult time knowing when to stop filming.  The thunderstorm was slow moving, making the light show last!

Note to self:  I may need to use the Canon Vixia for future lightning shows.  The Vixia can do the zooming for me and the vid quality might be a bit better in low light.  We'll see.

There's not much else to say about the vid.  Well, except I love watching it!  haha!  Somehow, the music seems to just fit.  It's a long-ish video, but I didn't dare speed it up in the editor.  It's fun to see how active the atmosphere was all on its own.

Yes, I've had to resort to numbering the FitVlogs.  I can't ever remember what day I'm on!  haha!

With that, here it is...
I should elaborate a bit, but I've been up all night and I may utter complete nonsense.
FAIR WARNING!

Alrighty, this vlog contains more speedy workout video done by me.  This time it's TurboFire, one of my absolute favorite programs.  It's been so long since I've been able to do this, what with the injury and all.

I also talk a bit about my new shoes.  The ASICS Gel-Craze TRs.  So far, they are the only sport shoes I've worn that seem to really support my feet, and part of the reason I'm able to get back to TurboFire.  They're snug, cushy, and stabilizing.  Love them!  Who knows?  I may even be able to go for a jog in them one day.

And there are other a few other things mentioned.  Pretty much, I'm trying to stay motivated and encouraged.  One way to do that is to not compare my fitness journey with the journeys of others, even though I certainly wish everyone success!  It seems, though, this time around I'm having a harder time achieving my goals.  It's a process, to be sure.  I'm still learning what my weaknesses are and how to overcome them.

Another struggle I have is watching myself in these FitVlogs.  I'm still trying to get used to seeing myself looking the way I do in the videos.  I don't feel like I look.  If that makes any sense.  I do realize the camera is a bit wonky.  It has a fish-eye distortion.  So my skinny ankles look even skinnier, and my feet look really tiny!  hahaha!  Unfortunately, the camera emphasizes my midsection in an unflattering way.  I should film using the Canon Vixia instead of the GoPro, I suppose.  It'll just be more difficult to see what I'm doing, since my filming space is so small.  Either the top or the bottom will be sacrificed.

Before I post my pathetic pic of the bloody blood moon, let me explain.

I'd almost forgotten completely about the event!  Shocking, I know.  Well, it is if you know me.  I love stuff in the sky.  The moon, stars, planets, thunderstorms.  Things like that are seriously amazing.  For me to miss an event up there is pretty rare.  When at last I learned of the event, it was late.  At first, I thought I'd already missed it.  Then I thought maybe I'd try to take pics with my phone.  hahahaha!  You really can't take a decent pic of the moon with a phone, I don't think.  Okay, well, not with my phone at least!  So where was my Nikon when I needed it~~

As it happened, my camera was in use by the eldest daughter.  Yes, she has her own--for our children, a good camera is practically standard issue.  But this time, she needed mine for a project.  Mine has a remote control, which seemed to be useful for her purposes.  And so, knowing my camera was likely in use and probably containing a memory card full of project stuff, I resigned myself to just let it go this time.  Maybe there'd be another blood moon.  I decided to go to bed.

But, you know me, I couldn't sleep.  My eyes stared up at dark shapes on the ceiling.  I peeked out the window and saw the beginning of the eclipse.  I waited a bit, my face hovering over my pillow, then checked again.  Half the moon was in shadow.  And then, there was only a sliver of white sparkling light, the rest of the moon shaded a deep orangey-reddish hue.  I couldn't stand it!  I jumped up, went to the daughter's room and snatched my camera off the tripod.  Not thinking to get the tripod, which was likely tangled up in wires and fabric anyway.  But I got the camera and proceeded to find my memory card, which was stowed away in my camera bag, which was in my closet, in the darkness!  Then to find a decent lens!  This went on and on.  Until at last, I had something suitable to shoot the moon with.

Finally!  I rushed outside, into the cold night.  The cold, creepy, eerily silent night.  Where were my pants?!  Nevermind that.  The moon.  I could see it through a frame of tree branches, a cinematic scene.  Is that music playing?  I snapped off a few shots, that I wasn't satisfied with, when the memory card claimed to be "FULL".  You must be joking. (^.~)  My eyes were bleary, maybe it was a mistake.

I tried deleting stuff.  Still, the card claimed fullness.  Egad.  Clearly I wasn't prepared for this.  Next time, I'll be ready.  ha!  It wasn't until much later that I learned the camera was set to take RAW images.  Images that take up all the space in the world.  The black hole of images, sucking up memory card space, unnecessarily, in my opinion.  I mean, normally, I don't need to shoot RAW, but there it was.  And so, this is all I could come up with of the bloody blood moon... 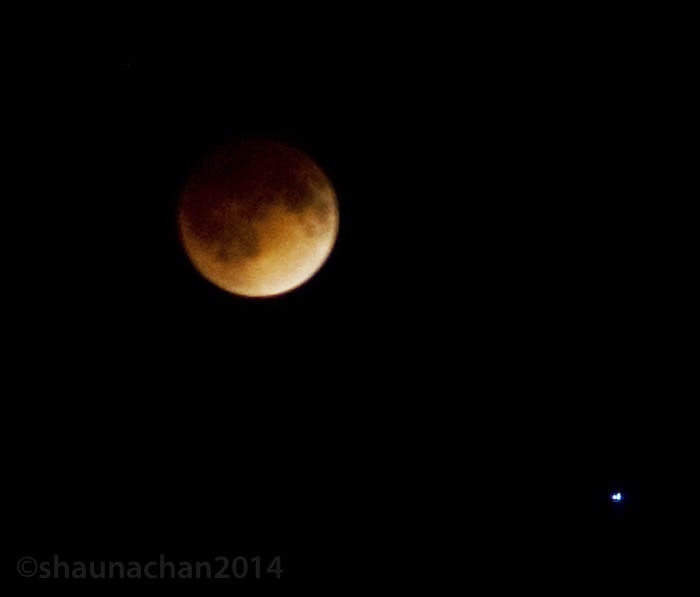 I haven't looked at my fitness calendar, so I truly have no idea what day I'm on.  Maybe I should just start numbering the vlogs all cold-like, without feeling--"FitVlog #2" and so on.  It would be so much easier!

So, wherever I am on the journey, this particular video is very short.  I didn't include anything from our workouts, but that doesn't mean we haven't been doing them!  Actually, I do have some workout video.  I inadvertently put it on the external drive and forgot about it.  Maybe some of it will show up on the next update.  Though, like mentioned, there's nothing to see here.  Move along.  hahaha!

In other news... of the video-ing sort...
I'm still trying to figure out the best way to edit videos, so that posting can happen quickly and more frequently.  Loads of times, I've filmed a thing and neglected to post it, having missed the opportunity to get it out to the world in a timely manner.  So it may sit, untouched, on some dusty storage device, or get deleted and altogether forgotten.  Not to say every video I make has value, but still.

Today, there's a storm brewing.  The GoPro is charged and ready.  If I capture anything interesting, I'll practice efficient editing skills, maybe getting a new video posted by tomorrow morning?

Yesterday, we had what was probably our first big storm of the season.  So I thought it might be neat to capture the storm's arrival, via the GoPro, whilst I drove around town picking people up, and whatnot.  I know I enjoy watching videos of others driving around either by car or by bike.  I don't know why, exactly.  Perhaps, I feel as though I'm living through those who travel roads unfamiliar to me.  Maybe people might enjoy seeing my driving video for the same reason.  So here it is~~

Other towns in our area had tornadoes and rather large hail (the size of baseballs).  Our town's storm was mild in comparison.  Still, it looked creepy enough and storm sirens did sound at one point.  Which is what ended my video taking of the event.  I wasn't sure if we were due for a tornado ourselves!  Younglings had to be rounded up and sheltered, just in case.

Yep.  This is just the beginning of spring weather events.  I hope to capture more video of future storms, though I know I'll need to be more careful.  I've a tendency to become enthralled with watching the sky twist and turn.  Lightning fascinates me, too!  Surely driving around in such weather isn't all that wise.  haha!  Still, I just like it so much!

As for other goings on, there will be a FitVlog soon-ish!  I need to record more video of the workouts.  I skipped a week or so of recording because the workouts were repeating, and I don't think we'd improved all that much in those couple o' weeks.  I'm currently piecing together video of the last week's workouts.  They are repeat workouts, but I think I'm noticing some improvements! Maybe, I think.  (^.~)