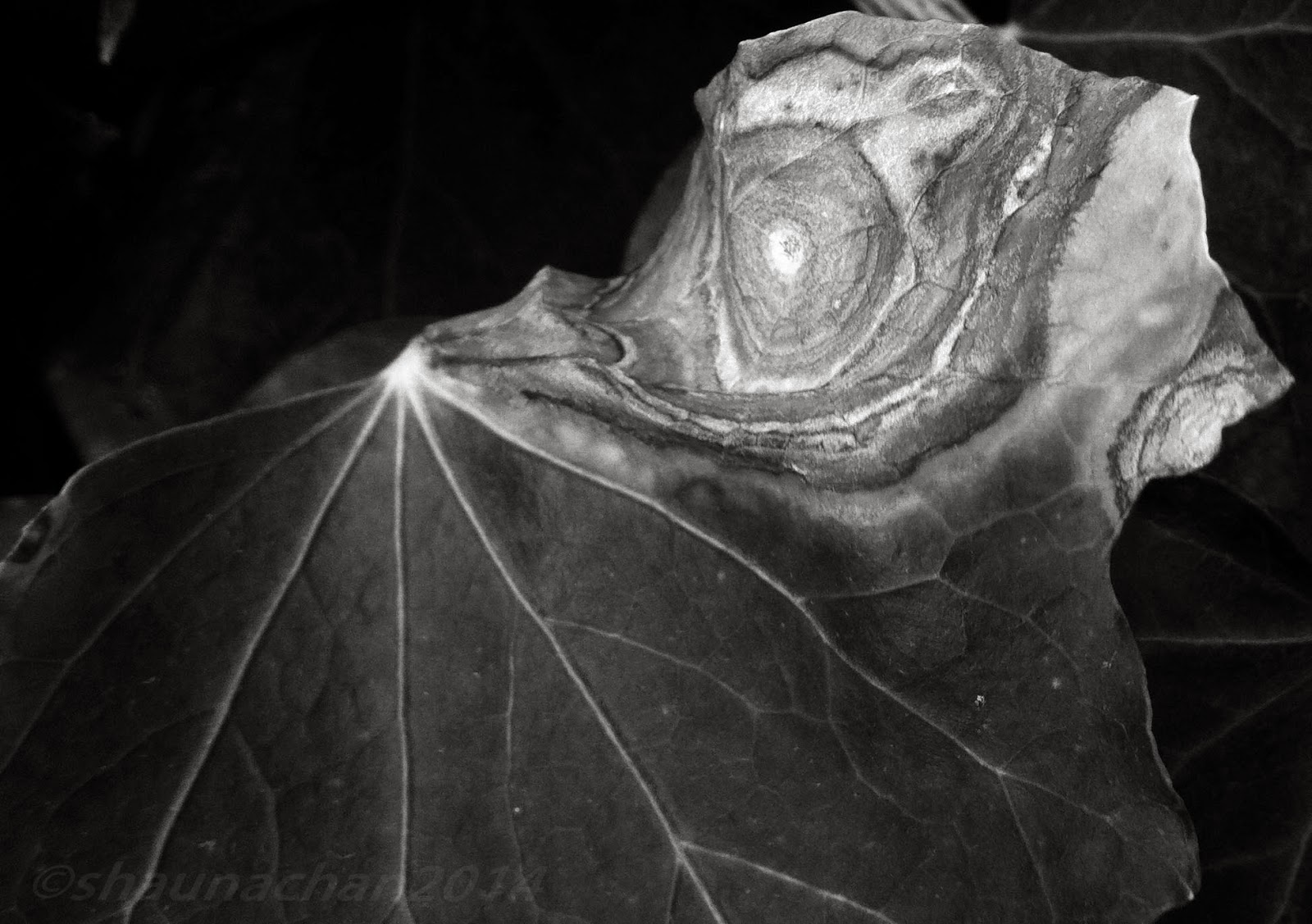 I don't know why I chose the pic of the ice-burned ivy leaf.  It could be that I've not picked up the proper camera in several months, thus I've resorted to using whatever current image found in my phone's pic album.  It's a thing, posting something most recent, no matter what the subject.

Perhaps it does fit the mood.  A bit of a rottenness, a blemish.  Though not enough to spoil the whole of the thing.  And the leaf still lives, clinging in defiance to its vine.  Sorta like me, I guess.  Anyone who knows me well can vouch for my stubbornness.  And I just keep on living.  Take that cruel world!  HaHaHaa! (^.~)

All week, I've known I need to update the FitVlog.  And I will.  I'm just late.  Terribly.  It's an issue with a previous video causing the hesitation.  Remember this post Nothing But a Thing ?  The video mentioned in the post is still in limbo, due to yet another copyright claim~~they pop up like mushrooms.  Funny thing, this particular claimant (IODA) is connected to Sony in some way.  After some investigating, I found the artist who provided the royalty free music used in the video is also connected with Sony, and he gave me permission to use the music.  Now, I can no longer find the music on the stock media site I got it from (Pond5.com), though I do hold a license to use it.  Is this proof enough?

All I know, it's taking forever to get the claim released, it seems, which has me a bit worried.  I feel confident in my dispute, but the powers that be may go against me.  The next course of action is unclear.  Maybe it doesn't seem like a big deal at the moment, but I suspect it could be.  And, really, YouTube is what I enjoy doing.  For now, at least.  Why would I want to mess that up?
(>.<)

As I type this, I'm in the zone.  Headphones clamped to my head with sounds of peace streaming out of them.  This time it is a four hour long playlist.  Do I need that long to say a thing? haha!  It is common practice for me to seek out long stretches of music to help focus or inspire thoughts.  Most of the music I've not heard prior to clicking play.  What I'm hearing now is lovely, so far.  Aren't we lucky they've chosen to share it with us so freely?

I just had a thought, were I writing this on paper, there'd be scrawling and sketches all about.  Things circled, highlighted and colored.  It would be a fun thing to be able to write select-able text freehand, while maintaining its "freehand" appearance.  I've created my own font, but that's not quite the same thing.  I'd like to be able to save the scrawlings, too, in this digital blogging-type format.  Something tells me this is possible somewhere.  I just haven't discovered it yet.

This reminds me of my neglected websites, where I used to make things like webpages with my sketches and raw freehand style, amongst other experimental things.  So much of that fun stuff was lost when I changed hosting plans.  Well, not lost, just saved in external hard drive aether.  When I've more time (soon, I hope) I need to work on those websites.  Pity not to use them for something.  So many fun things to do, so little time!

Moving right along...
Yes, there will be a FitVlog update.  I'll be filming more of the workouts starting later today.  After a bit of sleep, which I've not yet had.  (O.o)  As I mentioned once, somewhere, the workouts have been repeating each week~~we are starting to get good at them.  Which of course means they'll soon change and get more difficult!

Also, I need to make some tutorials.  Viewers have mentioned the bracelets I wore in my ring tutorial and wanted a video about them.  I think I'll do that.  Just need to get focused.  Pull my gaze from the clouds, calm the inner storm of uncertainty.  Soon.

Alright, I know I don't have the most fabulous nails to be painting fancy things on.  Still, on occasion, I do like to do a bit of funky with them.  This is one such occasion.

As you may know by now, I like space stuff.  So why not paint a sort of star field nebula-like thing on the fingers?  Especially since the Cosmos reboot has me inspired!

By the way, why don't we have more programs like Cosmos?!  It would seem many of us hunger for this type of show.  Instead, we are kept in a darkness and "entertained" by pseudo-reality shows and those with twisted plot-lines involving the gritty lowest of the low.  There surely is room for something that inspires a greater wonder in all our minds.  What else could keep us young, but wonder?

Video from Day 42 of my fitness journey!

Things have been going along pretty well so far.  We've completed a week or so of P90X3, which I talk about in the vid.  Also, I show a super quick montage of some of the workouts we did.

Lately, we've been a bit busy with loads of other goings on, thus a couple of workout days have been sacrificed.  No worries...  We'll be back at it soon enough!

Along with the FitVlog vids, I'm currently working on a short tutorial of sorts.  This one is about a nail polish look inspired by the cosmos.  The polish is beautiful, though I don't think the video does it justice.  No matter, the tutorial is meant to be fun and lighthearted.  It's coming soon, I hope!