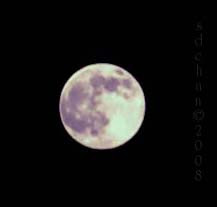 Tonight, the moon is full.

Camera in hand, I snapped this quick shot. Beautiful night.

Disgusted with certain people who form groups to celebrate their hatred of other people. Groups who, in their complete stupidity and utmost cowardice, kill others for no purpose other than to feel... um, powerful?

These hatemongers I speak of, serve no purpose to humanity whatsoever. Their ignorance is so utterly complete, I dare say, there is no saving them. They are useless, save for the wasteful sucking up of valuable oxygen and the taking up of precious real estate.

Yes, I too sound a bit dark. I do feel a hatred for what the KKK believes in. Where they stand is the absolute opposite of me.

It would seem to me, the peace-seeking peoples of this country would eventually have enough of such nonsense, flush out all these crazies and deal with them accordingly.

Another thing that has always driven me nuts! What is it with neighborhoods where shootings always happen at night to the point the neighbors are numb to it? No one seems to notice anymore. Something I hear going on in parts of Dallas. Or in the following recent case:

Neighbours reported hearing gunshots at Mrs Donnerson's home in the gritty Englewood neighbourhood on the city's south side yesterday morning, but no one raised the alarm until Hudson's sister Julia returned from work and discovered the bodies in the afternoon.(Source)

Ugh! It makes me sick.

What does it take to wake up~~~

Note to hategroups:
Send your death threats HERE. I'd love to hear from you. Oh, and please leave your current address and phone number along with your ignorant vitriol.
Posted by StarCat70 at 12:49 AM