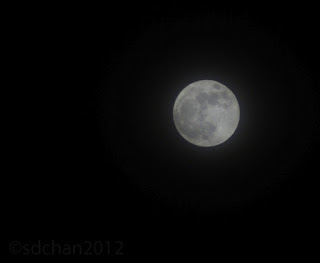 I'd almost forgotten, I admit.  And this is not a likely thing for me to do.  Forget a celestial event, that is.  The sky, after all, is a haven.  An escape from the wicked, chaotic part of life.  Where I cast my gaze for hours, searching for wee specks of light hidden in the ambient glow of city light.

If I think too much of it, the night, the sky, the stars, my heart aches and my eyes will moisten.  It's time for a visit to the open places.  The countryside, where few go, where the peace of the natural is.  Where, in the night, there are sounds unlike any you'll hear by day.  The place where the sky is full of the stuff of the universe.  And a dazzling universe it is.  A humbling space that can not help but put awe in us.

Yes, I nearly missed the big moon.  Perhaps, I'd been avoiding it.  Because there was little time to savor its presence?

Still, the talk of, let's just say, "Mr. Superior", crept into conversations on the social networks.  In quips.  And then photos of it poured in.  Not wanting to miss out, I hastily grabbed my camera, not concerned with the lens attached to it, and bounded out the back door for a peek.  The sky was hazy.  Even so, there it was.  A great glowing orb hanging softly in the aether.

At this, I could stare for hours.

I know what is lacking.  It's the wondrous conversations I've had before, with those equally fascinated with what lies beyond our sphere.  Those who would sit on blankets for an entire night, just to glimpse a meteor shower's fireball.  And once one had been seen streaking from horizon to horizon, burning so brightly you could hear its sizzle, still wait for yet another even better fireball, till the sun broke the eastern horizon.

It can't be recaptured, that feeling.  Though I've tried.