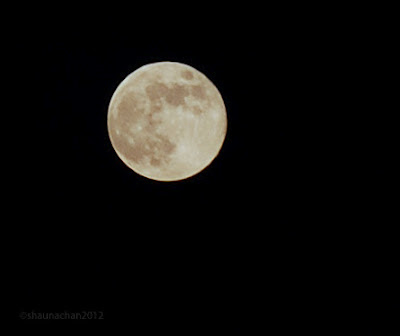 I've got probably hundreds of moon photos stored somewhere on laptops and memory cards.  They all look pretty much alike.  Ha!  And yet, I still keep shooting the moon.

Still, it's like home.  It's comforting to see it hanging there in the sky.

I need a better lens to take moon pics.  Something that will get a bit closer.

This particular pic was taken with my Nikon D80.  The lens, 85mm prime.  The f-stop I set to f/8, in hopes of getting the image a tiny bit sharper.  Since I didn't use a tripod, I didn't want to get the aperture too small.  I set the exposure time to  1/60 sec, again because I didn't bring a tripod.  Next time, maybe.  And finally, the ISO at 200.