More and more, as house hunting goes on, it is realized I could not have picked a more ill-fitting place to live than this.

Being somewhat liberal, it bothers me to hear children make jokes about people who are "different". Even worse, knowing it's their own parents who encourage this type of behavior.

I take it personal, the gay jokes, though I'm not. Of the few very good friends I have, some happen to be gay. Would I invite them to visit this town? I'm not so sure.

One wouldn't know it by reading the town forum. This was where a gay couple looking to relocate here discovered they weren't welcome. Well, at least they were told in a "nice" way. Ha! And several people stated they'd rather live next to an opera-lover than a blue collar worker. Huh?

Perhaps, it has something to do with the large number of churches surrounding us. Where God seems to only love straight people who have loads of money. I dunno.

Not only am I a tad liberal, but a bit old-fashioned as well. Which doesn't seem to be working for me. Maybe because being old-fashioned contradicts the liberalness.

I've got kids. Three of 'em. I see no reason to pay a couple hundred bucks a week for a day care to watch my kids grow. So, I do a novel thing. I actually watch my own kids! Of married people here, I'm in the minority on that one. Especially, in my income bracket.

Yep, we may suffer financially for it, and have to live in a tiny place. But, the babies are smiling, growing, playing . . . and I get to see them do it! With much appreciation for the husband's hard work. 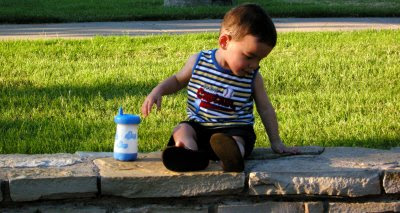