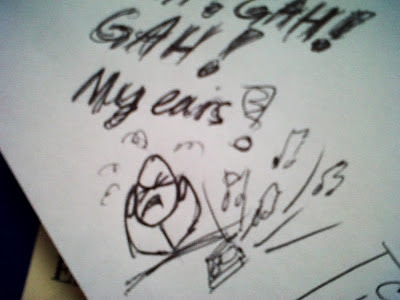 So, I was on hold the other day, attempting to get business done. Just something simple, really.

You'd think getting a simple thing done wouldn't take so long, but somehow it did. I just needed to correct a few things on an account. Easy enough. No biggie. And it wasn't really, once a human spoke to me everything was fine.

But, the waiting on hold began to get on my nerves, and I'm normally a peaceful kinda gal. First of all, I really don't like to make phone calls. Or even talk on the phone, because my hearing isn't all that great. I tend to misunderstand what's being said, and have to make assumptions a lot. Either that or ask them to repeat nearly everything that's been said. But no, it wasn't the wait that bothered me. Nope.

It was that music!

The butchering of perfectly beautiful classical music by blasting a terrible rendering of it as loudly as possible. It crackled, whined and groaned through the tiny speakers on my phone. I suppose I could have turned it down a bit, but I knew I'd not hear when a human would speak. So, I pulled it away from my ear and waited a while.

And then, the human spoke. He was very kind and knew just what to do. Though, he took each correction one at a time. So, yes, he put me on hold, after each correction. It began to get comical almost. And since I had to get these corrections done, I sat there, listening to the screaming violins as though they were right in my face shouting, "CAN...YOU... HEAR...ME? HUH? HUH?" in ever increasing pace. And each time he'd return, I could scarcely hear his voice, as, somehow, the connection was suddenly quite poor.

Eventually, I got everything done with that particular account. Despite being driven nearly mad by what would seem an overly eager and very robust orchestra. Then, it was on to another phone call I had to make.

And wouldn't you know, I'd been cursed. That phone call yielded the very same music! Gah!
Posted by StarCat70 at 1:41 PM